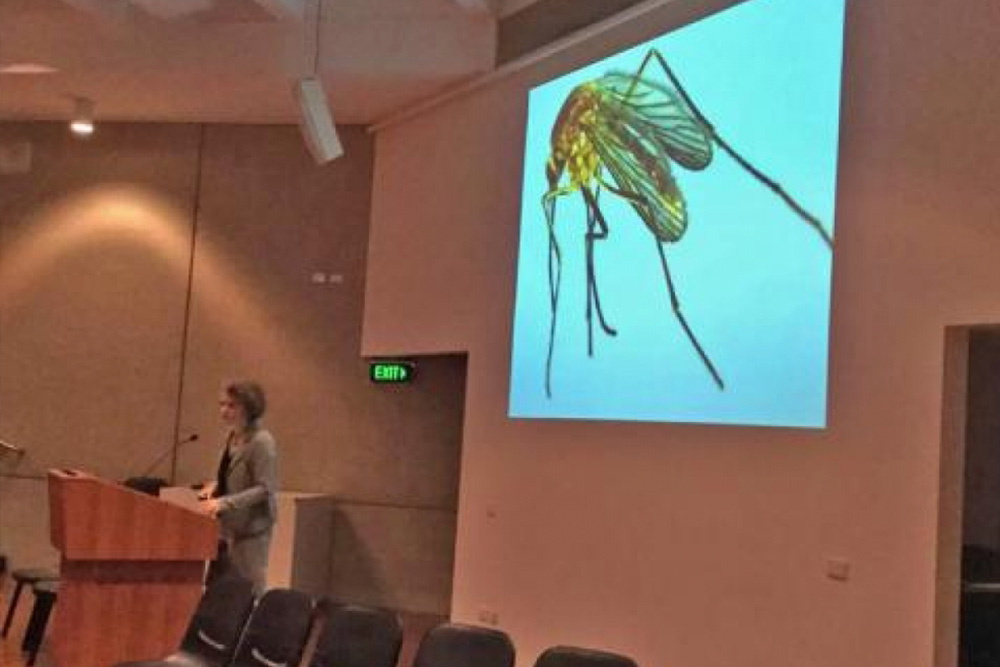 Invited by Inspiring Australia – thanks Jayne Keane – and hosted at the Queensland Museum & Sciecentre, I was happy to represent the European Citizen Science Association as key note speaker at the Citizen Science Forum Brisbane on 4 March.

The Forum brought together citizen science enthusiasts from all over Australia who presented their projects and initiatives celebrating success but also showing and discussing challenges. My take home message from the Forum and the following small group workshop: Don’t duplicate, synergise!

Jessie Cappadonna started by showing the growth and strategy plan for the Australian Citizen Science Association – an association as lively and engaged as CSA and ECSA. They had their conference earlier this year with about 200 participants from Australia, New Zealand, the US, and Europe. Facing similar challenges as ECSA, Jessie and her colleagues are doing an impressive job in keeping the strings together, developing the association further and being a hub for information.

Peter Brenton representing the Atlas of Living Australia, the world-leading Atlas project on Australian wildlife and biodiversity but also Australian collections of microorganisms, plants, fauna and insects, demonstrated the task of data and metadata standardisation in citizen science project; a theme he is also working on with colleagues from ECSA, CSA and other institutions in a joint Data and Metadata working group. He gave practical tips for projects on how to design a project when it comes to data standards including metadata standards. Peter gave me insights into the Atlas, its history, and recent developments which was eye-opening for me. There is a lot to learn for everyone who wants to set up an Atlas project. Thanks, Peter.

From Jen Loder, I could learn about about the Great Barrier Reef Citizen Science Alliance – a collaborative network of citizen science projects in the area of the Great Barrier Reef. I was astonished to see that the Great Barrier Reef Marine Park covers an area of about the size of Germany or Italy and has 3.000 coral reefs as well as 600 continental islands. Their vision is to enhance CS network around the Reef, build capacity and advance the credibility of coastal & marine CS as well as strengthen and grow the involvement of local communities. As probably everyone in CS the network also aims at supporting CS projects in finding (long-term) funding. The network is an umbrella to more than 60 CS projects ranging from Manta monitoring (which made me wish to know how to dive) to educational projects like marine litter or coral watch. Ten organisations are involved in the network and provide CS opportunities for everyone. I was too jet-lagged to remember the number of CS projects in total – I’ll have to ask Jen.

I am thankful to Apanie Wood (SEQ catchments) who underlined in her presentation that being a volunteer does not mean to be a non-specialist and encouraged all involved in CS to share knowledge and join forces. She is working with community groups mainly in Queensland. SEQ Catchments is a community based, not-for-profit organisation that works to protect and restore the natural resources of South East Queensland. SEQ catchments manages funding from both government and economy for community projects.

Piers Higgs (Gaia Resources) asked the question “What’s in it for me?” and showed various outcomes for people being involved in CS projects. His company brings technical solutions to projects working with the environment and they run own citizen science projects. I was impressed by the example of a lady in her second half of life who had not touched a mobile phone in her life before becoming involved in the dolphin watch project. Now, she teaches how to use the dolphin watch app to 17 year olds. This definitely is an individual benefit! Latest trends show that visualization of data is becoming ever more important in citizen science, e.g. as feedback for participants. Asked by a member of the audience, Piers recommended to network and share existing tools, e.g. to build or adapt a mobile app, as single projects often cannot afford the costs for programming new ones.

Despite lack of caffeine, Paul Flemmons (DigiVol) got my full attention presenting his CS project DigiVol where citizens have the opportunity to digitalise museum collections both in the laboratory as well as online. His statistics on participants show that most volunteers are high qualified females who are interested in natural history museums and want to do something worthwhile. In so called expeditions, participants get the chance to discover the collections of different museums in Australia. As this project does not require diving skills, I decided to participate in the near future. In our conversation after the Forum, Paul and I discussed the chance of having a European DigiVol project and profiting from the Australian experience – but it’ll probably fail because of inner-European language barriers.

The discussion showed that a lot of participants in the audience were as passionate as we are in citizen science – some of them experienced volunteering specialists. I heard the need of people to get recognized for their contributions and the wish for entry-points to get informed, share knowledge and expertise, and get in contact both with projects and people. Colleagues on the panel were very much interested in our European approach that they perceive as more strategic and policy-oriented than their own.

The Forum was followed by a very productive small group brainstorming workshop organized by Inspiring Australia and Gaia Resources on how to develop ways we can make citizen science data more applicable to decision makers and see the use of it rise. Based on what we all head heard in the Forum, we brought together the Australian and European perspectives and experiences – you will hear or read more of that soon in a discussion paper as a result.