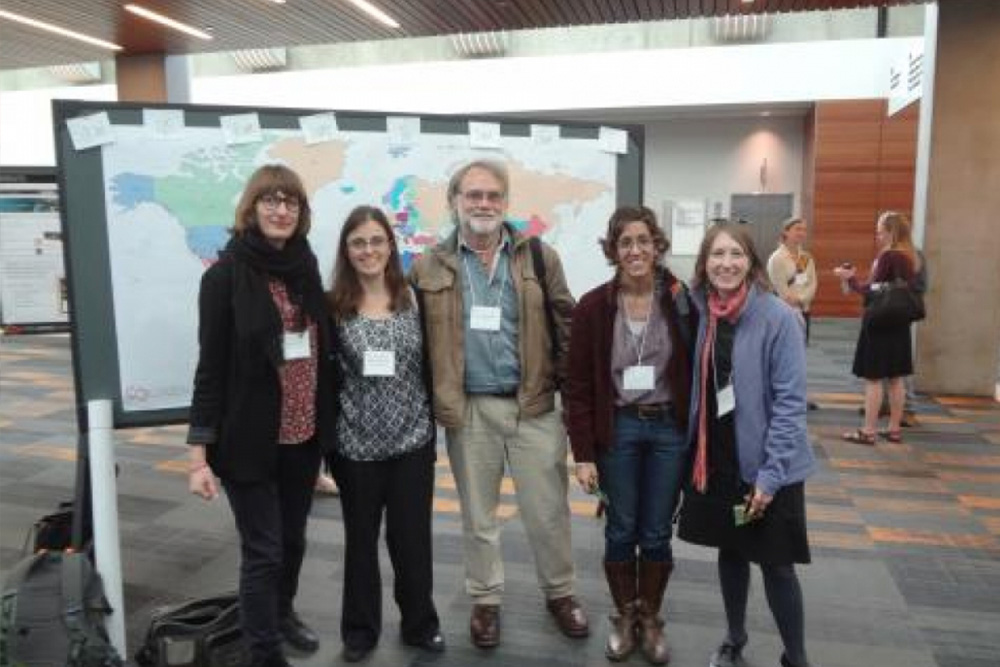 From the Periphery to the Centre

Impressions from the 1st international Conference on Citizen Science in San Jose, California, US, 11-12 February 2015

The CitSci2015 conference was organised by the Citizen Science Association (CSA), an organisation that seeks to foster Citizen Science both in the US and globally. Such networks are currently growing and becoming more institutionalised: the CSA has just elected its first Board of Directors, the European Citizen Science Association (ECSA) has establish its headquarters at the Museum für Naturkunde Berlin and the Citizen Science Network Australia (CSNA) will be hosted by the Australian Natural History Museum. The three associations are in close contact and have decided to collaborate on the organisation of future international conferences and the new journal Citizen Science: Theory and Practice and to create joint working groups, for instance on communication and web tools.

A large share of the conference programme was dedicated to the presentation and discussion of a broad spectrum of Citizen Science projects, most of them based in the US. Many projects are located at the intersection between research and environmental education. Some projects describe themselves as practicing community science. These initiatives focus on local issues, with communities often promoting the mapping of flora and fauna to contribute to environmental protection. Others address much larger number of participants focussing at a national or even international scale. eBird at the Cornell Lab of Ornithology is a key project in this context. Motivated by the idea to make the lists of observations from the states of ornithologists accessible for science and conservation, a large working group on Citizen Science has emerged. In their work, the researchers involved create the link between science, management and education. They are also concerned with evaluating their projects regarding learning and motivation of participants. Questionnaires and interviews are used to get a better understanding of the motivation of Citizen Scientists, to improve project and to stimulate long-term, sustainable participation.

The fact that natural history museums position themselves as important actors in the field of Citizen Science – through their own projects and the support of dedicated associations – has been taken up by another exemplary session of the conference. Here, the key lesson has been that European as well as US museums are facing similar challenges securing resources – both space and manpower – for Citizen Science activities. Moreover, to be successful, intensifying  citizens’ involvement in research has to be accompanied by internal restructuring and dialogue with the respective scientists.

The atmosphere in the San Jose Conference Centre was generally one of fascination for the worldwide engagement and for the multitude of existing Citizen Science projects. Critical reflection, however, was also a main theme of the conference. Issues like how to make Citizen Science activities more inclusive and how to design them to better serve citizens’ interests constituted one of the major thematic axes. Ethical questions were also addressed, such as how to deal with personal data or volunteer contributions. Gamification was one especially contentious issue in this context: Not all  “players” of Citizen Science games are aware  that their time and effort are used for research purposes and that their personal  data  could be used to learn about their identity, behaviour or preferences. Here, as in all Citizen Science activities, responsible communication with volunteers is key.

Altogether it was impressive how many and what a broad spectrum of initiatives regard themselves as part of the international Citizen Science movement. Also remarkable is that this colourful field of activities seems to have entered a phase of professionalisation, a trend that is apparent across world regions. The international journal as well as dedicated associations for Citizen Science practitioners have emerged to foster the exchange of experiences, mutual learning and the establishment of quality criteria. In line with these development is the hope to push research on Citizen Science even further beyond the collection of local case studies to a more coherent and systematic field of study that will be able to stimulate more critical reflection, inclusiveness and effectiveness. In this regard the organisation of the Citizen Science conference as accompanying event in the official programme of the annual meeting of the American Association for the Advancement of Science (AAAS) – the biggest learned society worldwide and publisher of the journal Science – can be read as a sign for Citizen Science being well on the way to establishing itself in the international scientific community.

Questions that we are working on in the European Citizen Science Association, like the breadth of Citizen Science, criteria for good Citizen Science projects or data quality and standards, are also subjects of discussion internationally. Yet, while in the US the relationship between Citizen Science, education and forms of engagement is well established and researched, European initiatives appear to be more strategically and politically oriented. This is shown, for instance, by the consultation carried out by Socientize and the resulting White Paper on Citizen Science or the recent report on Citizen Science and Policy from a European perspective by Muki Haklay published by the Wilson Center’s Commons Lab. With these topics, our experiences in developing ECSA as an organisation that provides resources of value for and advances the interests of Citizen Science practitioners in Europe, and global issues relevant to Citizen Science groups from around the world there are thus many entry points for a fruitful debate and joint action.

ECSA is happy to act as a facilitator for international cooperation and is establishing an Inter Association Working Group with CSA and CSNA. Please get in touch for more information and if you would like to get involved.

For more impressions from the conference and resources see the #CitSci2015 hashtag, a collection of contributions for motivations to be involved in Citizen Science (#WhyICitSci), the closing keynote of Amy Robinson from Eyewire, more storyfied multi-media collections of conference day 1 and day 2 by CSA’s Alison Young, some pictures, blogposts by Sarah West, Muki Haklay and Grace Troxel as well as posters and presentations.