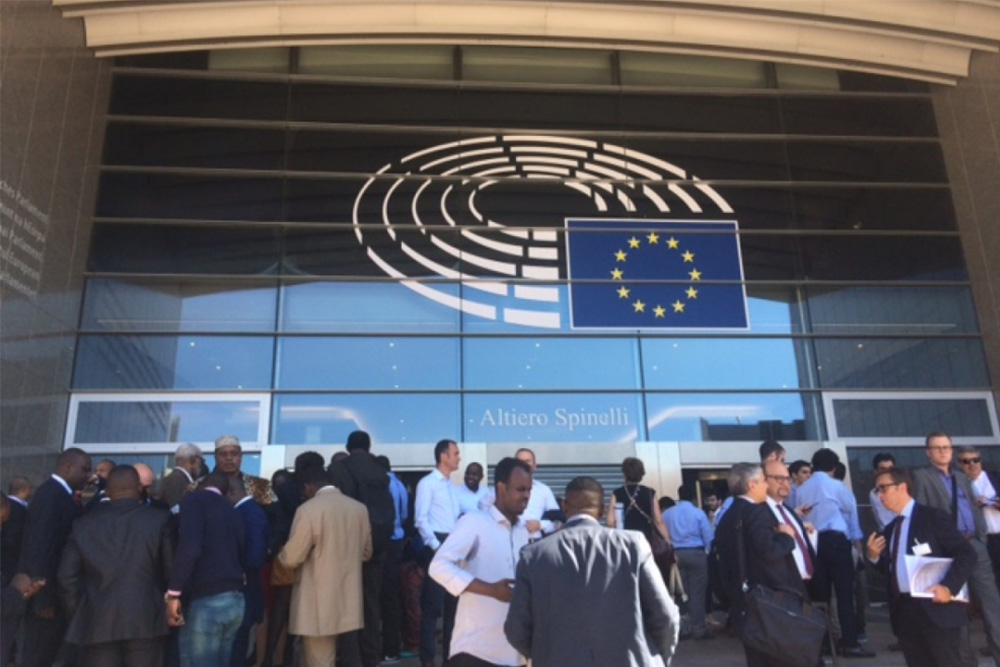 Summary of the MEPs Briefing on Citizen Science at the European Parliament, Brussels

2._20160826_final_european_citizen_science_association_-_mep_briefing_-_final.pdf). The event was organised by Martin Brocklehurst and Marc Lipinski of the ECSA Policy Working Group (WG) and sponsored by Michèle Rivasi, Clare Moody and Dario Tamburrano.

This unique event gathered some of the leaders in CS in Europe. Opening remarks were given by the MEPs Michèle Rivasi and Dario Tamburrano, followed by Johannes Vogel (see presentation), Chair of ECSA and Director of the Berlin Natural History Museum. Martin Brocklehurst (see presentation), Chairman of the ECSA Policy WG, and Marc Lipinski, member of the ECSA Policy WG, acted as moderators. Key players in the development of CS in Europe engaged MEPs, their support staff and officials from the EU with stimulating presentations, keynotes and discussions.

Professor Jacqueline McGlade, Chief Scientist at United Nations Environment Programme (UNEP), gave the keynote address on the international perspective on CS (see presentation). Many of the UN Sustainability Development Goals (SDGs) can be supported by CS programmes thanks to the increasing amount of open data provided by local communities. For this reason CS sources are being integrated into UNEP Live. Unep Live, is a global platform where environmental data and research are shared with the public and policy makers. It provides a powerful tool to stakeholders for supporting national monitoring and reporting to meet global environmental goals.

Hanny van Harkel talked about her experience of becoming a citizen scientist, joining the project Galaxy Zoo. Her participation with the project became a real life changing experience when she discovered a rare astronomical object, later referred to as Hanny’s Voorwerp. Hanny’s discovery has had a great impact not only for astronomy, but meaningfully for CS, showing how citizens can participate in scientific research, develop collaborations with scientists and also be credited in scientific papers where they sometimes appear as authours.

Muki Haklay, Director at Extreme Citizen Science (ExCiteS) group at University College London (UCL), gave an overview of the current status of citizen science in different levels of government – from local to the international (see presentation). He introduced the Horizon 2020 DITOs project (Doing-It-Together-Science), with highlights on the overall guiding principles, thematic strands and links between DITOs themes of envvironmental sustainability, bio-design and current EU policy topics. He also emphasised the active policy engagement activities that will be carried out during DITOs for the next three years, pointing out the upcoming policy events such as the European Stakeholder Roundtable on Citizen Science, DIY and Responsible Research and Innovation (RRI), Discovery Trips, Perspective on Citizen Science Conference and a Pan-European Policy Forum.

John Palmer, representing Movement Ecology Lab, gave insights into the role of CS against the spread of mosquito-borne-diseases (see presentation). He outlined how CS is being used in Spain to record the distribution of vector carrying mosquitoes and how data is used to tackle their spread. As such, CS provides a powerful tool for early warning system of therats. The platform Mosquito Alert is a CS project that enables citizens to notify the presence of vector mosquitoes, allowing scientists to create and update maps of distribution. John Palmer provided a practical example of the potential of CS as an early alert system and low-cost mosquito monitoring. Addressing the common concern over CS data quality, John Palmer showed that in regions where data collected by experts and citizens overlap, the same ‘danger zones’ will be identified. Finally, John outlined how the Citizen Science Movement in the USA and the EU are combining to establish a Mosquito Task Force Group that aims to develop a common CS methodology and a set of tools that can be used by citizens to monitor the spread of vector carrying mosquitoes. The work of the group has the potential to establish a global system if support and funding can be secured.

Keynote presentations were followed by an interactive session coordinated by Marc Lipinski with support by Aleksandra Berditchevskaia (Tekiu Ltd) and Gaia Agnello (ECSA), both DITOs Project Officers. A short questionnaire was handed out to participants with the objectives of understanding interests in CS from policy-makers perspectives, getting inputs on how to direct future DITOs events with policy-makers, finally, gathering comments and questions to be addressed during the panel discussion. Many people were aware of CS and revealed interest in future events. A good interaction between audience and panelists based on questions gathered from attendees closed the working day.

The event was a great opportunity to introduce MEPs and other EU officials to the work ECSA is undertaking and demonstrate the increasing relevance of CS to the policy work of the EU. By opening dialogue with policy-makers, ECSA aims to raise awareness on the relevance of CS to policy and therefore, enhance CS in Europe.

The MEPs present showed much interest in the potential of CS and confirmed their willingness to champion the cause of CS acting as interface with their colleagues among the European Parliament. This direct dialogue with MEPs reveals a potential for a very exciting momentum.

The next steps for ECSA are to:

The MEPs briefing has provided a tremendous opportunity for ECSA to open discussion with key individuals both within EU and the Global Community about the potential CS now offers key policy-makers. ECSA looks forward to bringing these opportunities to a successul conclusion.