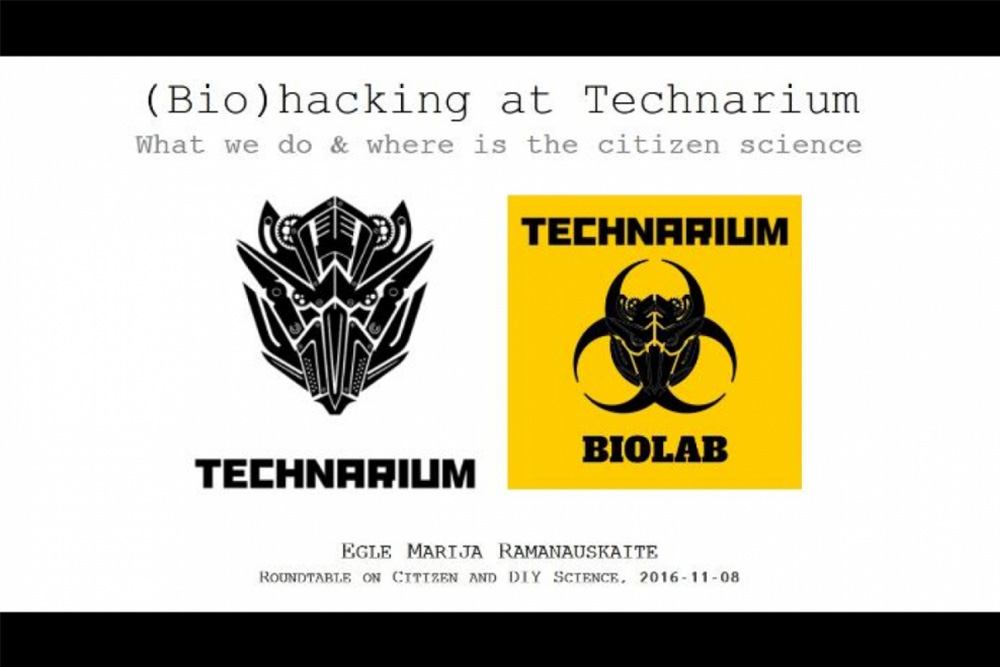 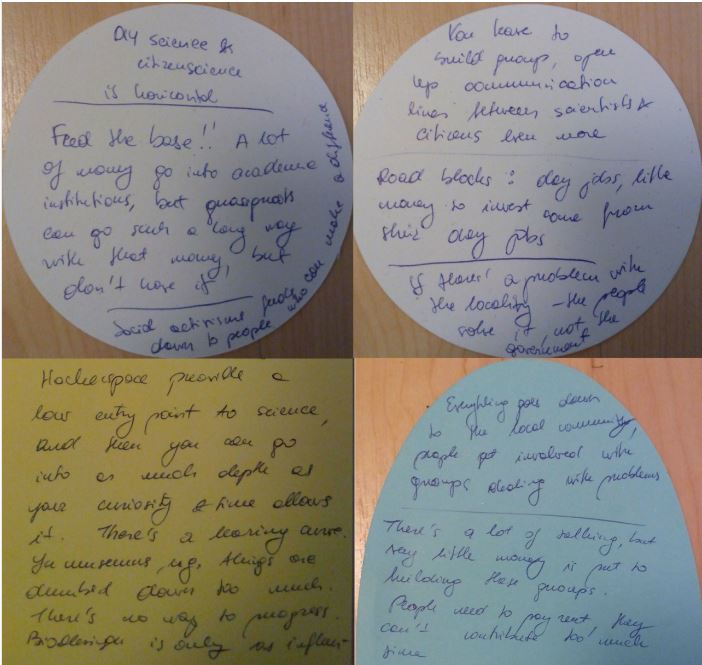 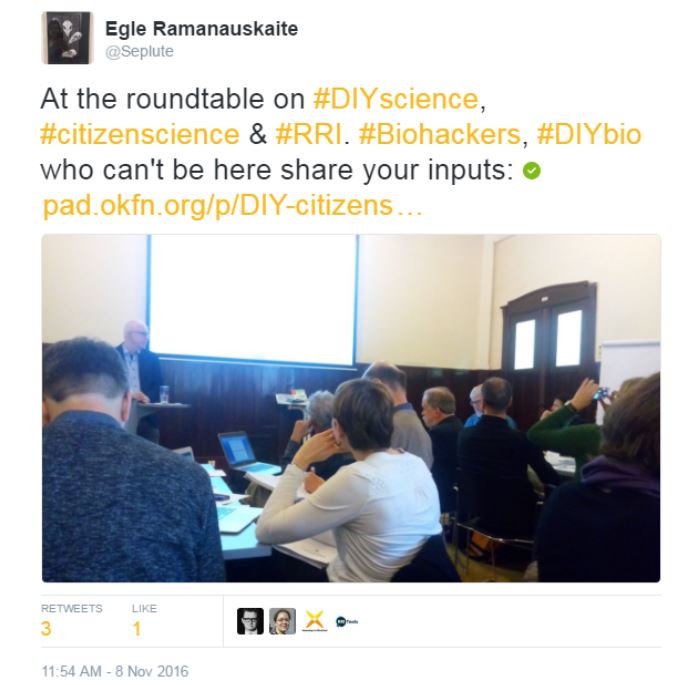 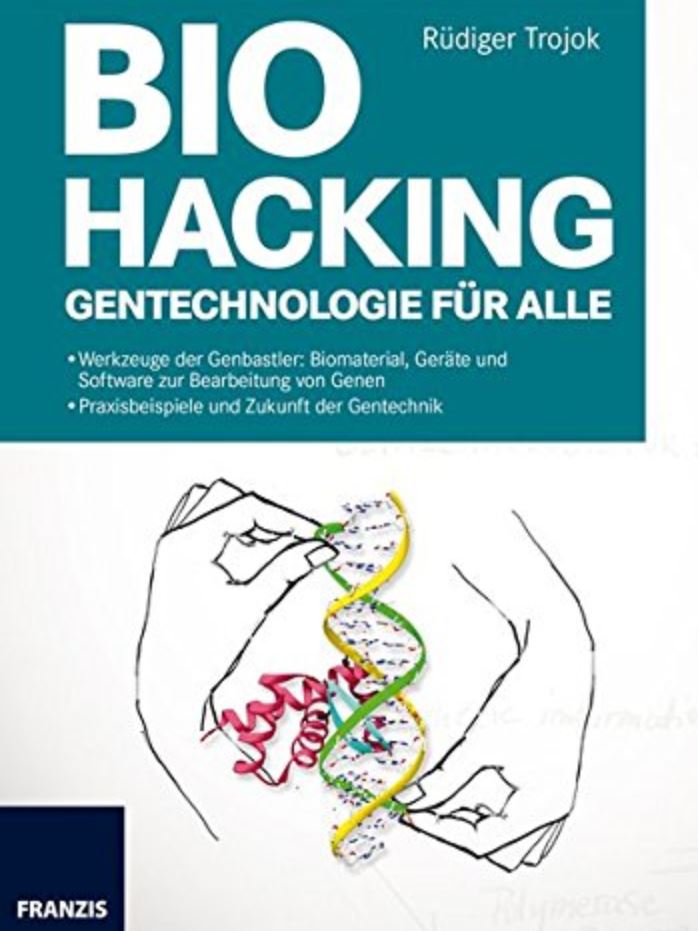 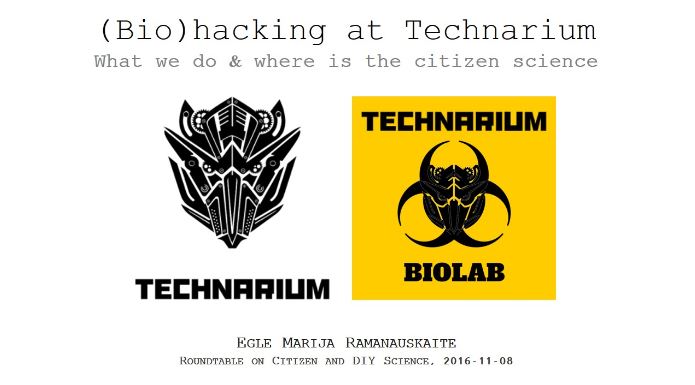 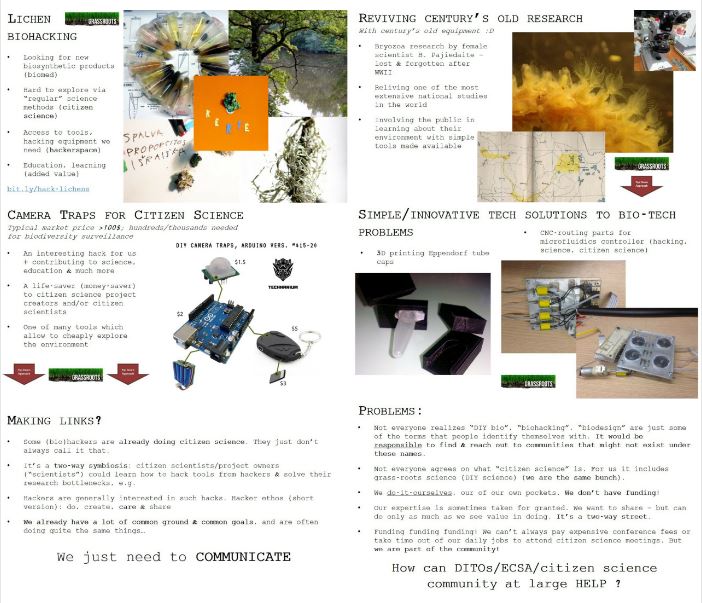 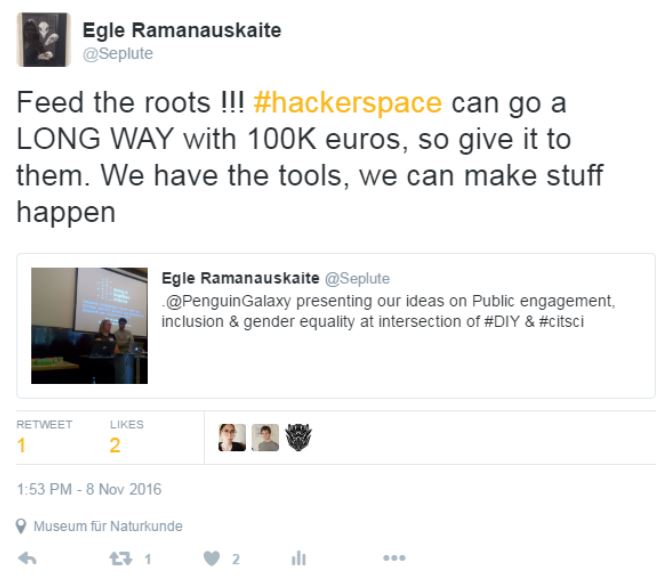 European Stakeholder Round Table on Citizen, DIY Science and Responsible Research and Innovation – A summary and comments by Egle Marija Ramanauskaite

by Egle Marija Ramanauskaite on 9th November 2016 – republished with permission from her blog “All things #citizenscience & #biohacking“.

Yesterday I got a chance to participate in the European Stakeholder Round Table on Citizen and DIY Science and Responsible Research and Innovation (RRI), organized as part of the DITOs – Doing-It-Together Science project.

I was invited to share my views on connecting the two communities, as I have been passionate about the issue since I joined the @technariumas​ hackerspace, where I am part of a biohacking lab, and we got involved in various citizen science activities.

The conversation is open, so please contribute to this pad: https://pad.okfn.org/p/DIY-citizenscience EVERYONE!

This post summarizes my general experience of the event, and my own talk:

Note 1: many thanks to Darlene Cavalier & the gang @SciStarter who whipped up a blog post on their own Citizen Science Maker summit, which happened Oct 26, just in time for our roundtable, so we can compare notes! Here it is: http://scistarter.com/blog/2016/11/citizen-science-makers-summit-arizona-state-university/#sthash.vAb60H7N.BCBaT71z.dpbs.

Note 2: I entered the world of citizen prior to the biohacking world, which I think might be affecting my views/understandings somewhat! I am learning a lot from the DIY community though, and have learned loads about some of the misconceptions we have as the “citizen science” community (referring mostly to ECSA and at large). I was representing Technarium hackerspace and the hacking for citizen science/DIY bioscience that we do here.

In any case, I have been aware of the rich Berlin DIY community, especially the biohackers, and I saw such meetings as an opportunity to sit together with these brilliant people & involve them more in the activities of the European Citizen Science Association, and make more links with the diverse citizen science community. (In fact, I first met some of them during ECSA 2016 conference in Berlin.)

For this purpose, I have been talking about a similar event with Lucy from Berlin (she’s one of the organizers of Science Hack Day Berlin, Berlin Science Hacking meetup and many other super cool events) and Claudia from ECSA and the DITOs project, so I was very excited to hear that the roundtable was being organized, and that I have been invited to share my views on the subject!

Unfortunately, it soon became clear that neither Lucy nor most of the Berlin DIY community will be able to attend, as it was organized during working ours on Tuesday :/ We had some word with the organizers on this, but unfortunately the time could not be changed.

(This is also when I realized how privileged I am to go to these events, as I work as a freelancer on a completely fluid schedule, and the guys at the Human Computation Institute are super cool about that too. But not everyone is as lucky as me!)

Thank goodness in the end it turned out that at least Rüdiger – an awesome Berlin freelance biohacker, and author of this book, which, hisses and curses, I cannot read as it is in German :((( – will be able to attend. I was very glad about that, since I knew him from before, and realized he will have valuable input to share on the needs & rights of the biohackers in the citizen science scene.

But back to the roundtable itself.

It was quite a small event (maybe 30-40 people, they kept coming & going) at the Museum für Naturkunde, Berlin.

It was opened by Katrin Vohland (ECSA and Museum für Naturkunde), followed by two keynotes on “RRI and Citizen Science” and “Open Science Policy Platform and its linkages to Citizen and DIY Science”

You can see some of the thoughts & ideas from those I tweeted in the Storify of the event here.

Then came my turn. I prepared my talk the night before, after meeting with some good friends from the Berlin hackers & discussing some of the concerns we had about the event, DITOs & the needs of our community. A large part of the input came, of course, also from the Technarium gang, who shared their views on the subject with me in the days coming up to the event.

FIY all of those have been compiled into this etherpad, which has contributions from Technarium, Lucy of the Berlin community, Pen of the Mammal Web citizen science project who has been in the loop & advocates strongly for citizen science being a two-way street (rather than something “handed down” to us by “professionals” who do not communicate with those involved), and I invited all stakeholders at the meeting & those who couldn’t be there to contribute.

So you are invited too. Yes – YOU 😛 the pad will remain live as long as we keep it so. I am going to try and include as much of it to the DIY science policy brief the DITOs working group is preparing.

My presentation had three parts:

You can check out my slides on slideshare here: http://bit.ly/DIYcitsci, and here’s a mini version & a transcript type thing below:

“ I am going to try to say as much as I can in the 7 minutes about the very different examples of citizen science related activities we have at our hackerspace, the links we see between the citsci and DIY communities and the problems we face at large.

One of the greatest examples of a project that is  a perfect combination of citizen science and biohacking is Lichen biohacking we do at our biolab.
Lichens are potential sources of yet undiscovered molecules that could be important in medicine, but they are very difficult to study by traditional “professional” science methods. This is why we an initiative evolved in our space to first invite everyone to collect lichen samples in their environment and then carry on in our biohacking lab to extract DNA & use molecular methods to search for new biosynthetic genes. Everyone can participate, and as much as they choose. This is a completely grassroot initiative, even though it mixes different methodologies.

Another one is a bryozoan – water invertebrate project, which arose first in the biohacking community but is now studied professionally and we support the citizen science part of sample collection and analysis. The project aims to retrace and revive the research done by a historic female scientists in Lithuania, who’s work was lost and forgotten during WWII.
Quite a different example is our “hacks” FOR citizen science. E.g. we are currently making a camera trap for citizen science, which would be a lot cheaper than the market standard. The idea came from the professional scientists, but the incentive came from us – we want to make biodiversity observation more accessible to everybody, individuals, schools etc, thus supporting more traditional citizen science of volunteer sensing.
Another thing to say is that our hackerspace, and certainly many similar spaces, have access to various technologies and are a perfect space for bio innovation to happen. For example, we have 3D printers and ceramics studio just around the corner, which means we can make tools for our lab. Sometimes they are quite simple, such as caps for Eppendorf tubes, but they are a game changer. Or just yesterday one of the members helped another to cut frames for a microfluidics controller he is creating with a CNC.

So by now it should be becoming clear that some biohackers are already doing citizen science, they just don’t always call it that. Plus:

How can we stay in the conversation?
How can the citizen science community at large help? “

I received a lot of positive feedback for sharing the life of the biohackers, and bringing some important problems to the table. I was so relieved !! Before I was having mixed feelings about the fact that I will be representing a minority at the meeting, even though it is about making links with the DIY community. On the contrary though, there were many voices of the DIY bio there, including Rüdiger & Björn who I knew from before, and Regine and Christian from Art Laboratory Berlin, who – OMG – later told me about all the cool bio art they do at their laboratory, and invited us to visit Berlin more often! It was also fantastic that they shared & voiced many concern that DIY field faces, including the lack of funding. One of the main things Christian suggested the policy makers/implementers should think about was along the lines of:

“If there’s 400 mln euros funding for public engagement in the EU, give it to 4000 hackerspaces, for example, not several institutes. 100K would be a nice “little” sum for a hackerspace. A hackerspace could go A LONG WAY with that money.”

Which I (and I’m sure my friends @technariumas​ would agree) agree with completely.

In any case: large part of the credit for my talk to be heard goes to Lucy,  Rüdiger, Björn and Mirela who we met with the day before, and who really helped to organize thoughts about the main concerns we have, and clearly voice them, as well as the Technarium gang for all their input 🙂

We also contributed a lot to the World Cafe-type discussions afterwards, and continued to highlight the main advantages & uniqueness of the biohacking community, as well as discussing how we could solve our problems, including making ECSA more inclusive for the DIY community who has day jobs and do everything out of their own pocket (including flying to conferences).

I was so glad there were many people who understood, and supported our points, as well as provided some helpful suggestions for getting funded (e.g. platforms like https://www.betterplace.org/en, but also the need to consider ways & platforms for funding smaller DIY projects in policy), food for thought about publishing our research results (thanks to Marc Lipinski for that) etc.

I made a bunch of notes/important points that came out of the discussions, although I am too lazy to transcribe them now, so will do so in a separate post 😀

Please see Storify of mine & others’ tweets during the day (let me know if I missed out any) for some of the important ideas that came up during the day: https://storify.com/Seplute/stakeholder-round-table-on-citizen-and-diy-science.

Thanks to Claudia & DITOs for organizing the event and for flying me there, of course. I hope we can improve communication within this large LARGE community we have here 🙂

Also here’s hoping that enough of what we discussed about the including & being fair to the DIY community will end up in the relevant policy documents, which we are intending to continue to contribute to.