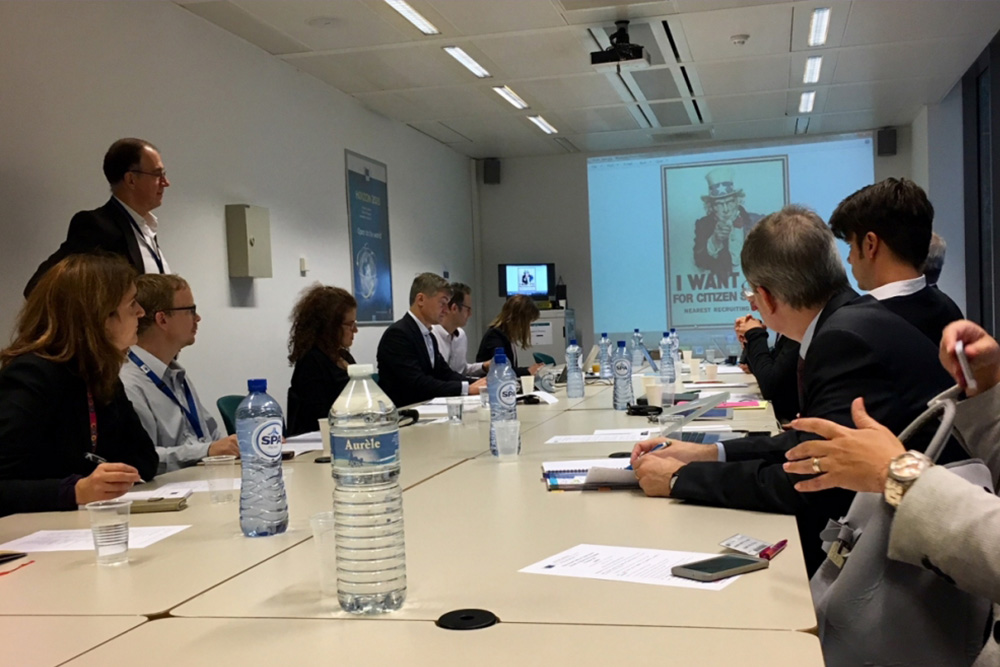 Towards a Citizen Science Roadmap

The two overarching axes of discussion for the event were: (1) the diversity of the Citizen Science (CS) community and how to support a community of communities, and (2) what are current gaps and where do we find leverage effects for engaging citizens in science. For each of these points inputs by CS practitioners and experts from the field have been presented followed by discussions in mixed groups.

Activities that will be conducted in the follow-up of this event include the publishing and discussion of the DITOs Policy Brief on Citizen Science and Open Science as well as a meeting co-organized by the COST Action CA15212: to promote creativity, scientific literacy, and innovation throughout Europe, ECSA and DITOs on 1st March 2018 in Brussels.

10:15 Citizen Science and the definition trap, input from various sub-communities

11:15 Discussion: supporting a community of communities

11:45 Gaps and leverage effects in engaging citizens in science: short input and discussion

14:00 Road-mapping towards 2027: discussion of key issues in breakout groups

15:00 Summary of breakout groups by rapporteurs and discussion in plenary

The discussion at the event explored several key questions:

What support does CS need?

It was highlighted that there is currently a lack of CS funding programmes. CS – and respectively the society – would benefit from long-term funding. While a designated focused funding stream for CS at the EU level would be one option of support, another possibility is including CS as a ‘horizontal priority’, which would recommend projects across all areas to include relevant activities with the respective budget support. In general, CS needs more compact and flexible funding, and operational support. Moreover, the range of types of projects under consideration should be clear since there are many different approaches to CS. Long-term impact and scalability of CS projects need to be analysed further in order for long-term sustainability of CS to be addressed. Moreover, it is important to be aware that it takes time to build the necessary involvement of citizens in CS projects – funding schemes need to take that into account. Funding is also necessary for research about CS. It was also mentioned that funding for CS is distributed unequally across sectors, with CS activities in environment, public health, humanities and arts, and other areas being underserved. Another related question was what support the EU should provide for CS. The EU Commission should provide a good framework for CS – not necessarily funding only. The EU framework of policy implementation does at the moment support CS. CS has been included in some action plans and the EU Secretary General is interested in CS. It is necessary to capitalize on what the EU Commission has financed so far.

How CS can and should be linked to policy making?

Participants discussed the implementation of CS and stressed that Europe should use its historical strength to be a leading actor in CS. Drawing strength from existing good practices, not reinventing the wheel as well as an ongoing dialogue between EC and stakeholders are central for CS in Europe to move forward. The European Commission embraces a broad concept of CS, recognizing citizens as actors. It was felt that there is a momentum for CS at the EC right now during the preparation for the forthcoming research programme, FP9. Several spheres of activity have been discussed: First, CS should be integrated in the relevant EU legislation. Second, CS shall become part of policy-making processes, especially through CS data becoming recognized next to official data. Scotland and Finland have produced toolkits for policy making from CS. In the US, federal agencies have to report on CS in their area. To move forward in this area in Europe, data policy needs to change and policy makers should encourage to share the data as open as possible but as restricted as it needs to be. Third, a CS toolkit for the EU, inspired by the one developed during the Obama administration (which was in turn inspired by EU activities), could be created in coordination with the Open Science Policy Platform (OSPP). It was further discussed that CS should help contribute to actions towards the sustainable development goals (SDG) process and that relations between CS and Responsible Research and Innovation (RRI) need to be considered.

How can CS contribute to empowerment of civil society and their concerns?

People will only undertake CS activities if it is relevant to their concerns and participating is rewarding. Therefore, beside activities targeting purely scientific goals (e.g. astronomy), CS should focus also on societal challenges. It is also important to go beyond involving citizens in data collection in order to unleash the potential of CS for empowerment. Citizens should be able to get involved in all stages of the research process, including choices of methodology used, type of questions asked, education, training and use of CS in empowerment of citizens and their concerns. Two important points for empowerment are agenda setting and autonomy. CS can help developing interest for science in civil society and empower citizens. A prominent typology of CS with respect to citizen participation is a distinction between contributory CS, collaborative CS and co-creative CS.  Co-creation as part of CS and a combination of CS, co-creation, STS (Science and Technology Studies) and community-based research were mentioned as ideas for new CS research topics. It was also highlighted that there is a need for showing cases of good practice and quality, such as the DITOs project which represents an example of going a step further in public outreach of its activities. It is also important how universities can benefit from CS. CS has also the potential to help increase social cohesion and hence can be a counter-movement in relation to the post-factual development.

How to strengthen CS data and infrastructures?

The discussion on CS data and infrastructures moved between two poles represented by the questions “Can CS data become part of the commons?” and “How do we avoid citizens becoming data slaves?”. It was reported that in many cases CS data are not open and data sharing in a useful way is limited. CS actors should be encouraged to share data in a useful way, although not everything can be shared. Participants highlighted that open data is not the same as reproducible data and suggested to create a framework of CS metadata that can enable the re-use of CS data. In this context the possibility of creating an aggregator platform, like scistarter.com or ciencia-ciudadana.es, was discussed. However, it was also seen as not appropriate to combine all data from CS in one platform (or database).

The COST Action CA15212: to promote creativity, scientific literacy, and innovation throughout Europe, which unites researchers working on CS in Europe, will organize a workshop for taking up some of the issues discussed at the policy round table on 1st March 2018 in Brussels.